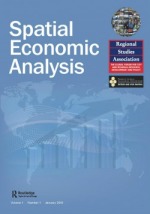 A structural spatial econometric model for nine regions of Israel is estimated using non-stationary spatial panel data during 1987–2015. The model focuses on the relation between regional markets in labour, housing and capital when there is imperfect internal migration between regions, when capital is imperfectly mobile between regions, and when building contractors operate across regions. Since the regional panel data are non-stationary, the econometric methodology is based on spatial panel cointegration. The estimated model is used to simulate the temporal and spatial propagation of regional shocks induced, for example, by regional policy (land for housing, regional investment grants). Impulse responses are temporally and spatially state dependent. They are also highly persistent because of longevity in housing and capital.